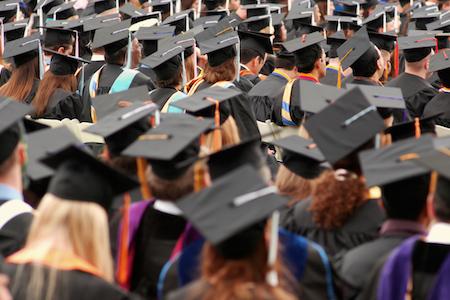 There have been many memorable moments during the 2017 commencement speech season. There was the moment that Donald Trump, while addressing the graduates of Liberty University, displayed his ignorance of the voting age of citizens of the United States (the country of which, the last I checked, he is still President). There was the moment that 100 or so graduating students staged a walkout when Mike Pence, the Vice President of the United States (and last-minute replacement for his boss), began his commencement address at the University of Notre Dame. And there was the moment that hundreds of graduating students turned their backs and booed as U.S. Secretary of Education Betsy DeVos took the podium at Bethune-Cookman University (a shunning, in part, due to the reaction to DeVos’s “tone-deaf assertion about HBCUs [historically black colleges and universities], suggesting that they were successful examples of school choice [when] in reality, they were born out of segregation and inequitable access to education.”).

But those aren’t the moments I’d like to highlight here. Instead, I’d like to point to four excellent commencement speeches filled with helpful and thoughtful advice doled out by highly successful, hardworking professionals, three of which earned their fame via TV and film, one of which earned his fame via the written word. And so, it follows that three of these addresses should be seen, and one read. Here they are.

When I heard the Ferrell was going to be speaking to the graduates of the University of Southern California, his alma mater, I assumed that he would a) streak to the podium when introduced, b) chug two tall boys through a beer bong before speaking, or c) enlist the help of a cowbell to close his speech. However, Ferrell did none of those things and, in fact, delivered a very moving (and, yes, very funny) speech, which should go down as one of the best of the year. Judging by the content of his address, Ferrell treated his being asked to speak to the graduates of USC as an honor, as well as an opportunity to act seriously (for a change). Indeed, perhaps the most memorable part of Ferrell’s speech was more moving than hilarious. It had to do with a big break he got in school, not afterward, thanks to a very prominent English professor, and pointed to the probability that Ferrell’s wildly successful comedic career ironically began with a college prank. In any case, make sure to watch the speech in its entirety. Ferrell ends it, literally, on a very high note.

There’s perhaps no more famous American TV personality alive today than Oprah Winfrey (that is, aside from Donald Trump). And in her speech at Smith, Winfrey used her years of experience interviewing successful people on TV to hammer home a very important piece of advice, which is to pay attention to your intention. She noted that, after a decade on TV, she came to the realization she “would no longer be used by television; I would use television to create a platform that could be of service to its viewers.” She went on to suggest that new graduates also “shift the paradigm to service,” adding that if they do this, “the rewards will come.” Which might sound, at first, to be simple and sugary advice, but on deeper thought (and experience) I think you’ll find it to be a radical approach to work and life. For example, if you find that you’ve come to a dead end with your job, your career, a project, or some other aspect of your working life, it could very well be that your intention isn’t pure; it isn’t in the spirit of service but only in the spirit of self-interest. Which is to say that perhaps for something to be truly successful, it has to benefit others and not just yourself. (Which I’m a strong believer of, having run into many walls likely due to some less-than-generous intentions). Oprah also very eloquently speaks of the incredible importance of learning how to truly listen to others, noting that “we all just want to be heard.” (Also true, I believe.)

Maybe my favorite commencement speech of the year so far doesn’t start out so originally. In her address at Tulane, Academy Award-Winner Dame Helen Mirren begins with a device that’s been a favorite of commencement speakers in recent years. She goes meta, framing her speech with phrases like “and this is the part of the speech the speaker speaks about her journey ...” and “this is the part of the speech where the speaker offers advice you’ll remember in 40 years ...” (incidentally, Mirren’s advice after that phrase is “No good will ever come from 3 a.m. tweets”). Her speech, though, picks up steam, loses the trite framing device, then gives way to some helpful, truthful, specific advice (including “Don't procrastinate, don't procrastinate, don't procrastinate”) and touches on some of the problems facing the world and thus the next generation of graduates (such as the Syrian refugee crisis) before she tells the very moving story behind her sole tattoo. It's a tale (and tattoo) with a powerful and important message. Note: You’ll also want to stay to the end of this address since Mirren flashes her ink before signing off.

Whitehead’s latest novel, The Underground Railroad, is the most recent winner of the National Book Award for Fiction as well as the Pulitzer Prize in Fiction. Whitehead has also authored numerous other novels, a couple of nonfiction books, and several great essays (at least one of which could serve as a commencement speech itself; it focuses on Whitehead’s first job after graduation: writing for the travel guide publisher Let’s Go). As for his address at Connecticut College, what you’ll find in it is more than a little cynicism, more than a little dark humor, more than a few beautiful turns of phrase, and more than a little inspiration. You’ll also find a lot of numbers, as well as Channing Tatum, Jennifer Lawrence, the Navy Seals, the Hubble Telescope, Napoleon, Shakespeare, and a lively discussion of the probability of finding your soulmate. I’m tempted to quote from the brilliant and moving finale of the speech but won’t out of fear of spoiling your reading experience. I’ll just say this: Read it. It’s well worth your time.

Today there are more than 16,000 students studying in the U.S. who are citizens of one of the seven countries named in President Trump's immigration order.

There's a sentence in Don DeLillo's new novel, Zero K, his 16th, that I've been thinking about nearly every hour since first coming across it last week. The sentence comes about one-fourth of the way into the book, and is a line spoken by a character who's co-created a sort of cryogenic chamber, a place where people die and then are preserved in death in hopes of being resurrected in the future when technology has advanced far enough so that human immortality is no longer a dream but a reality.